Here’s a video summary of my sabbatical travels touring U.S. astronomical observatories. It is entirely inadequate to capture the depth and richness of the experience, but it will give you a taste with some pretty pictures and peppy music (from http://www.bensound.com).

Here is a map of my sabbatical journeys. It includes the trip to Green Bank, the New England swing, and the Grand Tour in chunks. The paths are approximate, especially on the Grand Tour, as they are here driving routes, and I took the train. Also, I didn’t put the exact addresses of the places I stayed. But you’ll get the idea. I think if you click on the box in the top left of the map header you’ll get the legend. Then if you want, you can turn off the driving routes, which will make it easier to see the places I visited. There are several light blue pins marking places I thought I might get to but ended up not going. This time. I worked out a rough estimate that I traveled over 8000 miles in a little over two months.

I can’t tell you how grateful I am for this experience, for the opportunity to travel to see these amazing astronomical instruments, and for the people who made it possible, namely my congregation at Catoctin Presbyterian Church, my family, and my wife Molly. I am grateful to the church for the financial means to go and for the spiritual support to send me. I am grateful to Molly for her encouragement and for her taking over many of the duties I left as I went. I am grateful to God for the privilege of this journey and for these beloved people in my life.

As my sabbatical is drawing to an end I plan still to keep writing about my experiences. I’m still processing the whole thing, what happened, what didn’t happen, what I learned and didn’t learn, what it all means. So stay tuned.

I’ve been collecting pictures of my sabbatical travels, only a few of which have appeared here so far. I’m putting them on flickr. I think flickr is kind of out of favor, but I’ve got a terabyte of free space, so I’m going to use it. If you want to see my pics, you’ll have to use it, too.

[Update: I ended up putting all my photos on Google, so I’ve added those as secondary links in the descriptions. So you can see them at either Big G or flickr, or both.]

So here are the links for my travels so far. I still have to write up a few of these visits, and I’m about to embark on the Grand Tour, so expect more posts and more pics soon.

The Green Bank Observatory, Green Bank, WV, is a premiere radio astronomy site and a great place for a star party. Their largest instrument, featured here, is the enormous GBT, or more formally the Robert Byrd Green Bank Telescope, the largest fully steerable radio telescope in the world.

The Hopkins Observatory at Williams College, Williamstown, MA, is the oldest extent and continuous observatory in the United States, with 180 years under its belt. It has been moved on campus twice and hosts a small museum, a planetarium, and Alvan Clark’s first professional telescope, a 7″ refractor.

PTS is not an observatory, but it is my alma mater, and it’s one of my retreat stops. I didn’t spend as long as I had hoped there this trip, but I guess I spent long enough. Pics include my old hall, Miller Chapel, and the very spot where I met my wife, among others.

The Holmdel Horn is a national historical landmark in Holmdel, NJ, but you have work to find it. It is on the campus of the Nokia lab on Holmdel Road, across the parking lot, up a hill, around the bend, and in the maintenance yard. It is important for being the instrument that found the first evidence of the Big Bang, namely the cosmic microwave background radiation.

The Allegheny Observatory is on my list primarily because it’s near my hometown, making it easy to also visit my dad and my daughter. It is, however, a pretty cool site with two impressive refracting telescopes. The smaller, the 13″ Fitz-Clark, was built by Fitz, later damaged, and then refigured by Alvan Clark near the height of his career, and we got to look at Jupiter through it. The big scope is called the Thaw (for its benefactor), a 30″ refractor, about 48 feet in length built by Brasheer Optics.

This weekend I’ll travel by train to Racine, WI, to the Siena Retreat Center for a week, followed by a visit to the Yerkes Observatory, an important historical and scientific facility that is scheduled to close in October. Here’s hoping they find new patrons. After that, it looks like LIGO in Louisiana, then Arizona, southern Cal, back to Arizona, and New Mexico. That should wrap up by mid-September.

It’s the oldest extent and continuously used observatory in the United States.

What is Hopkins Observatory at Williams College in Williamstown, MA, Alex? <DING!>

I had never heard of Williams College or its observatory before this project. As I started digging around and expanding my list of wanna-sees, and looked for the oldest, this is what came up. It was established in 1838 (the college goes back into the eighteenth century) with equipment purchased from England, of which a transit scope and mercury regulated clock, used together for mapping stars, still exist in the observatory’s museum wing.

From what I have learned, Albert Hopkins, brother of the college president at the time and an ordained minister, was adamant that the college should provide practical educational experiences for students, especially in science and in astronomy in particular so they might experience the glorious works of God and not just read about them in books. He was the driving force and namesake of the observatory. Stone blocks over each of the two doors have biblical references inscribed, one from Isaiah and one from Haggai, encouraging those who enter to consider who formed the heavens and set the stars in their courses.

The rough-hewn stone building is not large compared to others on campus, but stands two and a half stories and contains a planetarium and a museum, and it is crowned with a wooden rotating cylinder (acting like a modern observatory dome) that houses an historic telescope. That telescope, a 7″ diameter refractor, is the first one made professionally by Alvin Clark, the legendary American telescope maker of the 19th century who completed his career with the famous, world-record holding 40″ refractor at the Yerkes Observatory on Lake Geneva in Wisconsin. (The Yerkes is on my list for August.) I am told Clark left his job to build the Hopkins refractor in 1851.

I arrived at Williams about 4:30 p.m. and took a bunch of pictures of the Hopkins Observatory exterior. There was a planetarium show at 8:00, where I was to meet John who was presenting the show and was to give me a wee tour, so I had time to kill. The WC Museum of Art was just next door, so I went to see some preColumbian religious artifacts, some costumes of Tom? Shawn, an American dancer, and listened to a presentation on a multidisciplinary investigation into nonhuman animal mind given by a philosophy professor. An interesting afternoon to be sure! Made my way to the Purple Pub for dinner, which took longer than I would have liked and got back to the observatory about 7:50. Just as I was about to introduce myself to host John, a couple of his extended family appeared, and my chance was lost. I enjoyed the show with about 30 other people, more than I would have thought would fit in the wee building, but there were still a few seats after that. After the show I eventually had the chance to introduce myself to John as the guy who was coming, and we briefly discussed how what we had was a failure to communicate. Nevertheless, he showed me the museum pieces and told me about the five directors of the observatory since its founding and other history. Regrettably he said he could not show me the Clark telescope except in the daylight. John and student research assistant Ross encouraged me to check in with admin Michele in the morning to see if I might get a look at the scope yet.

So that is what I did. And Michele, who had scheduled my visit in the first place, got me in with Prof. Jay , who is director of the observatory, and who agreed to show me the Clark. It was quite generous of them both, for who am I but an odd pilgrim passing through, and the professor had just returned from Tazmania where he had seen a partial solar eclipse. Turns out, according to Ross and John, he has seen 66 eclipses live, more than any other human. Any way, we went up the spiral staircase on the outside of the observatory and in the cylinder-dome, and there it was! What a beauty! A long dark blue tube with brass ends and fittings on a more-or-less German Equatorial mount atop some massive timbers. It was pointing down, and Jay said to pull the end down. Wow! I got to touch it and move it! Bang! And knock the far end into a beam! Holy crap!!! Okay it was more of a bump than a bang and no harm done, I guess, but holy crap! Between my clumsy attempt and Jay’s more steady hand  we got the end down where we could read the brass plate: Alvin Clark & Sons, Cambridge, Mass.

Jay also let me try turning the dome-cylinder, which is accomplished with a hand crank. A dozen or so turns on the crank and the roof moved about 6 inches! Jay said, “That’s why we don’t do that very often!” For sure.

I got a couple pictures, and that was about it, probably five or ten minutes, but he was meeting his wife for lunch, and I got to see, touch, and hopefully not destroy an amazing astronomical artifact. I was giddy as a school boy and am very grateful to the astronomy department at Williams College. Get to know their name. 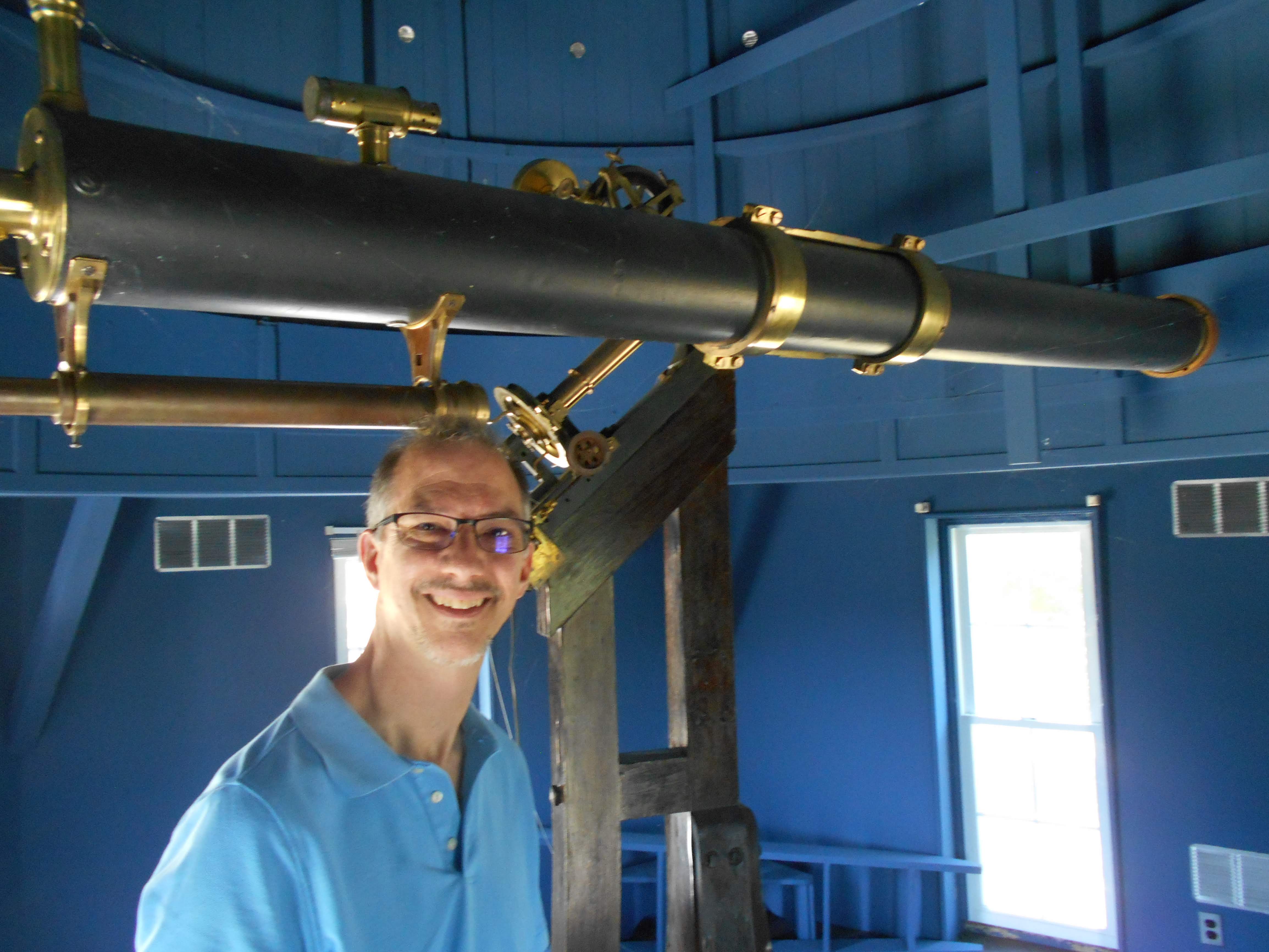 Follow A Pilgrim of Earth and Heavens on WordPress.com